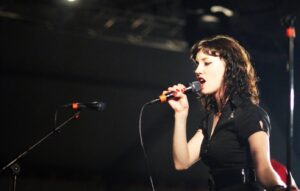 NME
By
Charlotte Krol
8th June 2022
Kate Jackson
Kate Jackson of the Long Blondes – CREDIT: Getty
The Long Blondes have reformed for a handful of live shows as they continue to celebrate the 15th anniversary of their debut ‘Someone To Drive You Home‘.

2021 marked the milestone, with Rough Trade re-issuing their classic as a deluxe version at the tail end of last year. Now, the Sheffield duo will extend the celebrations into 2022.

Kate Jackson (lead vocals) and Dorian Cox (lead guitar and keyboards) have today (June 8) announced a handful of new gigs, which will be the first time that they’ve performed together as band since splitting up in 2008.

Jackson said in a statement [via Clash]: “I can’t wait to stand on stage and look over at Dorian while we perform our songs again for the first time since 2008. Something I thought would never happen.

“The reaction to the 15th anniversary reissue of ‘Someone To Drive You Home’ convinced us both that we had to play it live and we have spent the last six months reworking the songs as a duo using a lot of junk shop synths and electronic sounds. We’re so excited to be back.”

The Long Blondes
The Long Blondes Credit: Press
It’s not known at this stage if new music is on the horizon. Earlier this year, a new track of theirs featured in Jackson’s art installation at Leicester’s LCB Depot.